Like us, the Barnards were pressed for time—we because of the number of venues we were trying to visit in only four days, the Barnards because they were concerned about the coming rains and the possibility of not being able to reach Swellendam. In Genadendal Lady Anne opines: “I regretted much our leaving this place so hastily, I greatly wished to have spent one day entire, here;” but Andrew points out that “the River [Riviersonderend] which runs at no great distance from Sweet milk Valley is the most hazardous of any, should rain fall to day of which I see a little threatening in the sky…. Should we lose to day by staying here, we may lose all the rest of our Journey” (335).

But after breakfast on Friday May 11th 1798 Lady Anne still found time to visit the gardens of the Genadendal Mission (“with which I was greatly pleased” [335]), and to visit the Hottentot huts of which she remarks: “I entered one or two of the round ones, the Hottentots were out working in the Field … furniture here was none, a few sticks were in the Centre to boil their kettle, and tied to the sticks of the roof was a few skins.”

Lady Anne proceeds to comment thoughtfully on a wide variety of Hottentot cultural practices, including their exceptional personal cleanliness (“a Hottentot … is washing himself all day long”) (336-37), and reflects on how little she understands about their way of life: “I shall try to inform myself better, my poor little account of things must be very superficial, there are wiser people who will give the deeper informations and that I hope shortly” (340).

“My first object was to take a view of the place from a distance, where I could not only bring in the Church but have a view of a part of the Craals which surrounded it; many of them reached far beyond what my drawing could take in.”

This image may be Lady Anne’s view of Baviaanskloof, but it is commonly identified as “Sweet Milk Valley … a Dragoon Quarter” (see below). 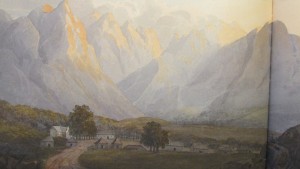 In Genadendal, however, Lady Anne reflects curiously on the difficulty of drawing in the bright sunshine and in handling perspective from a height:

“The Father and I climbed the Mountain to the right, the Sun was warm and shone inconveniently bright on my paper. I put him between it and me, till such time as little Charles should reach me with my Umbrella…. The Sun was too vertical to give me the proper shadows, and I do not understand drawing from a height. However the sketch is just. He [the Father] was transported when I traced the Church Bell the erecting of it I saw had been a flattering Epocha in the calm tenor of time.” (336)

But eventually the Barnard party took to the road in the direction of Swellendam, and so did Michael D and I. We returned to Greyton and picked up the gravel road toward the small town of Riviersonderend (“river without end”) that ran alongside the river of the same name at the foot of a range of spectacular and sheer Zonderend mountains, part of the Overberg area, rising 5000 feet, as this photo, “Solitude” by Pete Mack, indicates (http://www.panoramio.com/photo/33919059). 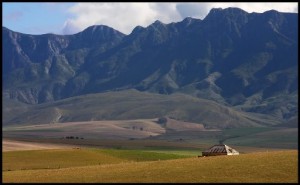 Of this valley Lady Anne observed, “Sweet milk Fly, or Valley was seen at a distance, or rather its mountains rising over Knotty hillocks” (327). Furthermore, her sense of the natural and abundant richness of this valley, and its openness to cultivation and enjoyment, is conveyed by her appropriation of resonant phrases and images from a famous poem by the great seventeenth-century poet and translator John Dryden:

“More Mountains when we left these and another range beyond—‘ever ending … still beginning … was this country worth the winning? … Yes, here’s climate, soil, besides thee … Cultivate … the Gods provide thee.’” (327-28)

The editors of Lady Anne’s Diaries (Robinson, Lenta, and Driver) do not note, what few readers would know, that Lady Anne here draws on Dryden’s Alexander’s Feast (1697). This is a moment in the poem in which Dryden imagines the ancient musician Timotheus using his music to move the feelings of Alexander the Great to embrace and enjoy (rather than to invade and destroy) the abundance and beauty of the world before him:

Softly sweet, in Lydian measures,
Soon he soothed his soul to pleasures:
War, he sung, is toil and trouble;
Honour but an empty bubble;
Never ending, still beginning,
Fighting still, and still destroying;
If the world be worth thy winning,
Think, O think, it worth enjoying;
Lovely Thais sits beside thee,
Take the good the gods provide thee. (ll. 97-106)

We were pressed for time, driving quickly, and aware that we were unable to stop at most of the farms visited by the Barnards in this valley, even if we could identify and find them, which was becoming increasingly difficult, due to the many changes that have occurred over the last 200 years. Lady Anne identifies the farms by the name of the owners at the time, most of whom have changed over time; her Dutch orthography is neither consistent nor accurate, and she does not clearly distinguish one farm from others nearby. To compound difficulties, Lady Anne’s diaries while providing fascinating insights into the life of eighteenth-century farms in the Western Cape, are digressive, anecdotal, and impressionistic, and chronology and narrative structure are not among her strengths as a writer.

There is thus some ambiguity among scholars and others who have attempted to follow Lady Anne’s route in identifying exactly where and when she stayed on this part of the journey. For example, in his In the Footsteps of Lady Anne Barnard (1990) Jose Berman states that “the farm Hartenbeestekraal, which belonged to Arend van Willigh at the time of Lady Anne, had no building erected on it till 1813” (70). But Hartenbeestekraal was a later name for Zoetemelks Vallei, what Lady calls “sweet milk Valley … a Military quarter for the Calvary, and reckoned the most beautiful situation in the Country” (334-35), which, in turn, became The Oaks, and she apparently did stay at Zoetemelks Valley.

The Oaks is still a working farm while also (like many other seventeenth and eighteenth century Dutch farms in the Overberg and Cedarberg) offering elegant holiday accommodation and a wedding venue (http://theoaksestate.co.za/).

We parked; asked permission of a young man and a young woman to look around, and set off to simply soak up the atmosphere and take some pictures.

But the young man – Gert Ehlers – sought us out and invited us into the elegant (private) house. 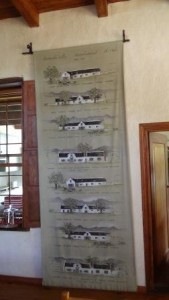 He drew our attention to the antiquity of the estate, showed us historical documents tracing its history from 1727, when it was called Zoetemelks Valley, through its change of name to Hartenbeestekraal and then to The Oaks in the 1840s. 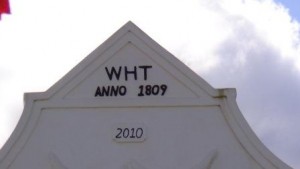 Mr. Ehlers also pointed out the extensive additions made to the eighteenth-century farm in 1809, and described the  major restoration undertaken by the Ehlers family to restore the dilapidated estate after the Manor House had been unoccupied for 50 years: “The discovery that the old buildings were a truly historic gem was quite unexpected. It initiated a new adventure and extensive project. The three year renovation of The Oaks Farmyard has been a family effort”(http://theoaksestate.co.za/thefarm/restoration/).

The Oaks is now under consideration for Provincial Heritage status.

To our amazement Mr. Ehlers then showed us the room in which Lady Anne had slept in 1798, now renovated to the same high standard as the rest of the complex, and used as a private suite. Mr. Ehlers reported his mother, Marianne, as saying that she felt like Lady Anne on waking up in this room (see below).

This valley and the farmhouse were painted by Thomas William Bowler (1812-69), the British landscape and seascape artist whose images of the Cape from the 1840s to the 1860s have done so much to shape the identity of the 19th-century Cape. But I was unable to locate suitable images online for the purposes of this blog, and those reproduced here are poor photographs taken of Bowler’s images from a volume of artwork shown to us by Mr. Ehlers.

“I took the view, it is without grace but it is as I saw it from the point where I sat. While ere, and while the setting Sun fell behind the Stupendous Mountains, as I sat alone, how many thoughts succeeded to thoughts of awed, grave, pleasing, but somewhat sad, tho’ calm impression; … at the extreme corner of the World, yet not unhappy…” (341)

Lady Anne was impressed with the house (“built on a better plan than some others, more spacious”), noted the impeding rain, invoked the “good genius of mon mari” and enjoyed “an excellent supper” provided by Mynheer Tunis [Theunissen] (341), who “was more than commonly civil to us” (342).

In the morning, however, Lady Anne was less pleased: “This same sweet milk Valley does not answer my expectations” because she expected a village that did not materialize, and she did not find the “charming woods where the greatest variety of choice timber was to be found,” that she expected to find there. Instead, “I saw not a tree except those I have drawn” (342). They took their leave of Martinus Theunissen and headed towards Mynheer Lindens [Hans Jurgen Linden] whose farm Lindeshof or Gansekraal is situated on the Slang River, a tributary of the Riviersonderend.

Had time allowed, we would have been happy to linger and to discuss the finer points of the cultural history of The Oaks with Mr Ehlers and his mother, Marianne, both of whom have been helpful and kind in furthering our interests. But we too headed in the direction of Lindeshof. 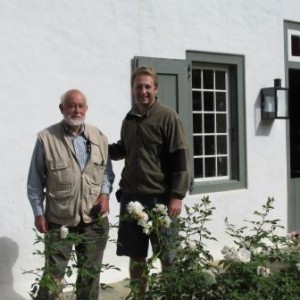